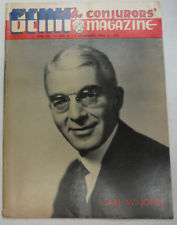 Ring 19 of the International Brotherhood of Magicians is named for Carl W. Jones. But who is he, and how did he get a magic club named for him?

s was the publisher of the Minneapolis Journal, a daily newspaper. But in magic circles he is best known as the publisher of the classic magic book Greater Magic in 1938. The book was written by John Northern Hilliard, and its full title was, Greater Magic: A Practical Treatise On Modern Magic. Hilliard’s notes and manuscripts were edited by Jones and Jean Huggard. The book was dedicated to Professor Hoffman (author of Modern Magic) and illustrated by Harlan Tarbell.