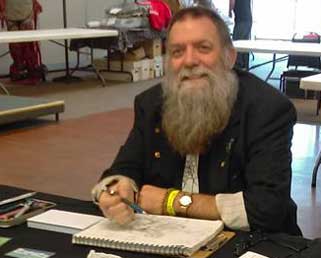 Mike Wilke began hi’s fascinations with magic and drawing as a child. Recently, he combined those lifelong interests with a new book of magic-themed cartoons. His cartoons appear in The Linking Ring, the official magazine of the International Brotherhood of Magicians.

“I’ve always done some magic cartoons, because I’m a magician and I know a lot of the stuff,” explains Wilke. “When I stated this I posted a few of the magic cartoons, and I started getting responses from them. One guy suggested doing a book of these.”

That led to his newest book, Watermelon Bones! The Final Load. “A lot of magicians were asking for it,” says Wilke, who acknowledges that only people with a background in magic will get some of the jokes. The cartoons include references to sympathetic silks, the shuttle pass, the Goshman pinch – even the book’s title is a joke for magic insiders.

Wilke’s interest in magic started early. “My dad showed me a coin trick when I was like 7 years old,” he recalls. “He actually started me out on it, and I decided I was going to start doing it. I liked the idea of doing something no one else can do, like any kid.”

As an adult, Wilke helped manage The Magic Shop, the forerunner of today’s Twin Cities Magic and Costume, working with Fred Baisch and then-owner Dan Thompson. “I sold one guy a linking ring set, and I explained how it worked,” he remembers. “He came back a week later and said, ‘I have a broken ring here.’”

Wilke, who has also worked as a hair stylist and in the printing trade, began his involvement with the International Brotherhood of Magicians back in the 1970s. Over the years he has served in most of the leadership roles Ring 19 has to offer, including president, vice-president, secretary, sergeant at arms, and chaplain.

These days Wilke is mostly focusing on cartooning. His work regularly appears in the Forest Lake Times, Isanti County News and Woodbury Bulletin. He started publishing collections of his work in 1989 under the title “Watermelon Bones”; his new magic-themed book is the eighth book in the series. His work also appears on Facebook. Recent topics are as diverse as Wilke’s interests, and include magic history, famous cartoonists, and hairstyling.

While Mike Wilke isn’t doing formal magic shows these days, he still enjoys taking people by surprise with a trick. His favorites include the linking rings, ring and string, color-changing knives, and coin effects.

Copies of Watermelon Bones! The Final Load are available for $15. To get your copy, contact Mike through Facebook or send email to magicbymike@msn.com.