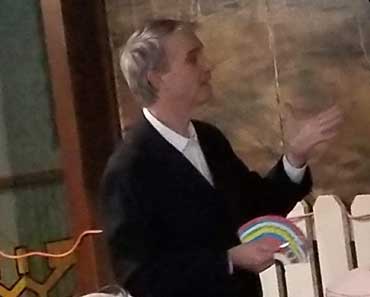 The annual magic contest is judged by past presidents of the club. This year’s judges included Mike Arazi, Tyler Erickson, Jennifer Graham, and Mike Wilke.

Erickson noted, “I don’t know that I’ve ever seen as large a pool of competitors. It was truly a marvelous turnout, with a surprising amount of variation: manipulation, mentalism, sleight of hand, and apparatus.”

Graham said, “The past Ring 19 Presidents were pleasantly surprised at the number of contestants participating in this year’s Presidential Challenge. The caliber of magic presented was impressive. It was wonderful to see individuals, who would not normally perform in public, exhibit such finesse and skill.”

Wilke added, “This was one of the best, and biggest turnouts that we’ve had in recent memory!”

Prizes will be presented at the club’s annual banquet, next year.

Here are photos of some of the contestants, courtesy of Ring 19’s minister of propaganda, Ryan Ouradnik.

no images were found